If you have been working with .NET events then you should be familiar with the following pattern (overly simplified for brevity):

What we have here is a simple publisher publishing an OrderPlaced event and a subscriber which handles the orders when the events are published. I have seen this pattern being used in many code bases and is pretty much the standard way of writing pub-sub applications in the enterprise. However, there are a couple of things that I do not like about this approach.

So how can we improve what we currently have?

An Event Aggregator is a service which sits between your publishers and subscribers acting as an intermediary pushing your messages (events) from one entity to another.

Martin Fowler describes it as:

Here is a diagram to make it even more clear: 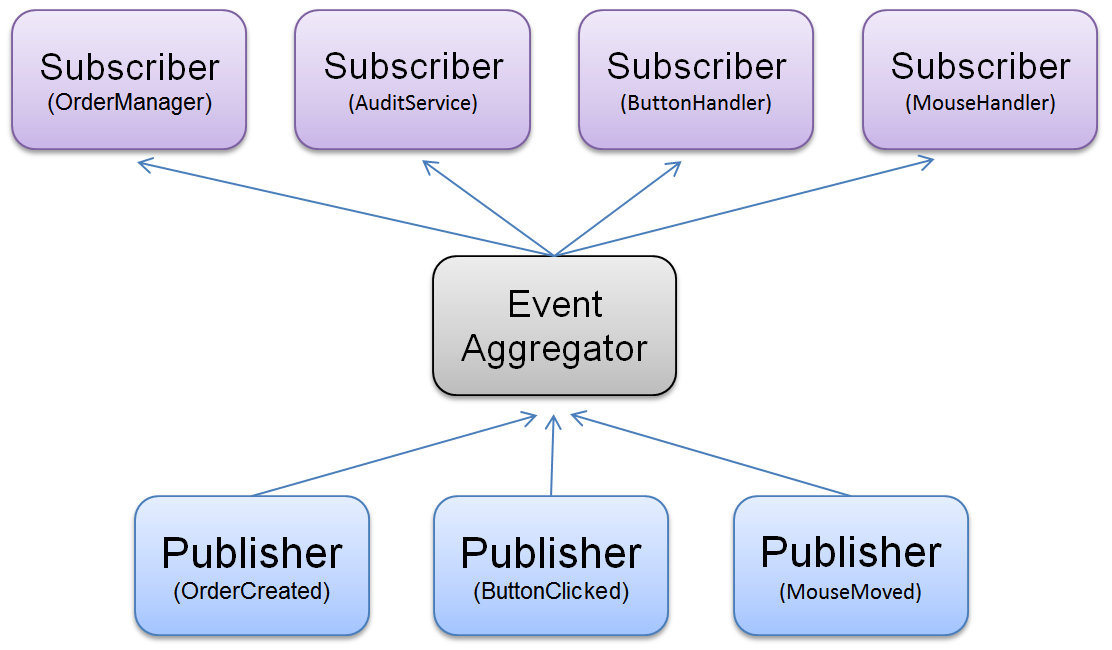 So what this means is that your publishers and subscribers are no longer coupled together and they only need to hold a reference to the Event Aggregator.

I hope by now you accept the benefits that the Event Aggregator pattern can bring to your publishers and subscribers. I very much like this pattern and how it can result in a much cleaner code-base. In my journey to find a suitable implementation in C#, I found a number of candidates:

But they either lacked the optimal performance or the kind of API I was hoping for; So I came up with the Easy.MessageHub.

The API surface-area is very simple, there is the MessageHub representing the EventAggregator which can be registered as an IMessageHub using your favourite IOC framework and injected in your publishers, subscribers or anyone else who might be interested in the messages coming in or going out.

In it's simplest form one could publish using:

And for the subscription:

There is also the concept of global event handler allowing you to have a single hook into every message that is published by the hub perhaps for the purpose of logging, audit etc.

And finally if any of the subscribers throw an exception while receiving a message, instead of breaking all the others you can subscribe to the error by:

Now armed with our new friend, we can rewrite the original example as:

Note in this version:

The source together with some benchmarking and usage examples are available on GitHub and NuGet package available HERE.

PS, if you enjoy reading my content then please consider

Buying me a coffee to keep me going.

In my quest to reduce latency and CPU consumption of our components, I came across a very interesting and probably not so well known performance gotcha!

That's it, it is official. Today in their weekly community stand-up the ASP.NET team announced what many .NET developers had been waiting to hear ever since ASP.NET vNext was announced back

Hi, I am Nima
—
Cleaner Pub-Sub using the Event Aggregator Pattern
Share this